The Chianti Classico territory’s capitals are Siena and Florence and it is shared between the Provinces of the two municipalities. The zone amounts to 71,800 hectares  (177,500 acres) and includes the entire territories of the municipalities of Castellina in Chianti, Gaiole in Chianti, Greve in Chianti and Radda in Chianti and parts of those of Barberino Val d’Elsa, Castelnuovo Berardenga, Poggibonsi, San Casciano Val di Pesa and Tavarnelle Val di Pesa.

The characteristics of the climate, terrains and altitudes, which are unfavourable for most crops, have made Chianti Classico a region that excels in the production of premium wines.

Rows of vines alternating with olive orchards are a characteristic feature of the Chianti landscape. About 7,000 hectares (17,290 acres) of vineyards entered on the DOCG Register for the production of Chianti Classico make this appellation one of the most important in Italy. 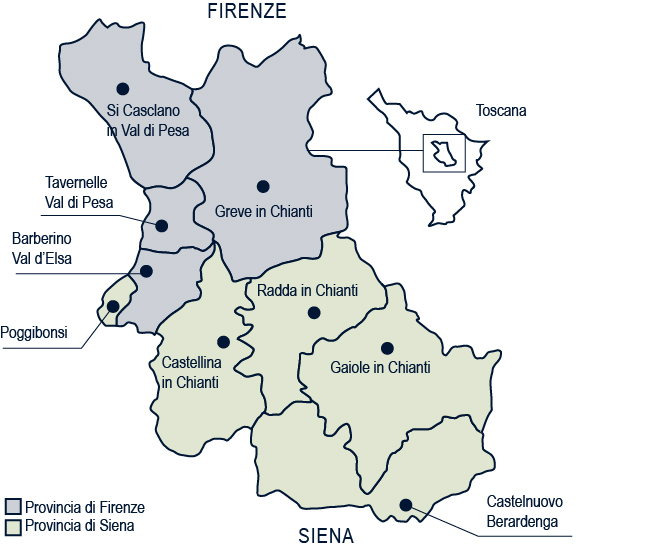 THE SPECTACULAR PANORAMA OF CHIANTI RADDA IN CHIANTI

Radda in Chianti is a beautiful medieval town enclosed in large defensive walls. Located up on a hill between the valleys of Arbia and Pesa, it has ancient origins. Inhabited since the 9th century, Radda was officially mentioned in a document from 1002. Its stone facades add to the medieval look characterized by narrow streets and tower buildings.

It is no wonder that Radda served as the capital of Chianti; its prime position served as a point of coordination between its neighbours Gaiole and Castellina. The picturesque panorama, the small town feel the calendar rich with cultural events and the natural flavours of the land make Radda one location in Chianti to be considered when looking at purchasing property in this area.

If you are looking for a property location between Siena and Florence, close to restaurants, major sites and good roads - then Radda makes sense all the way around.