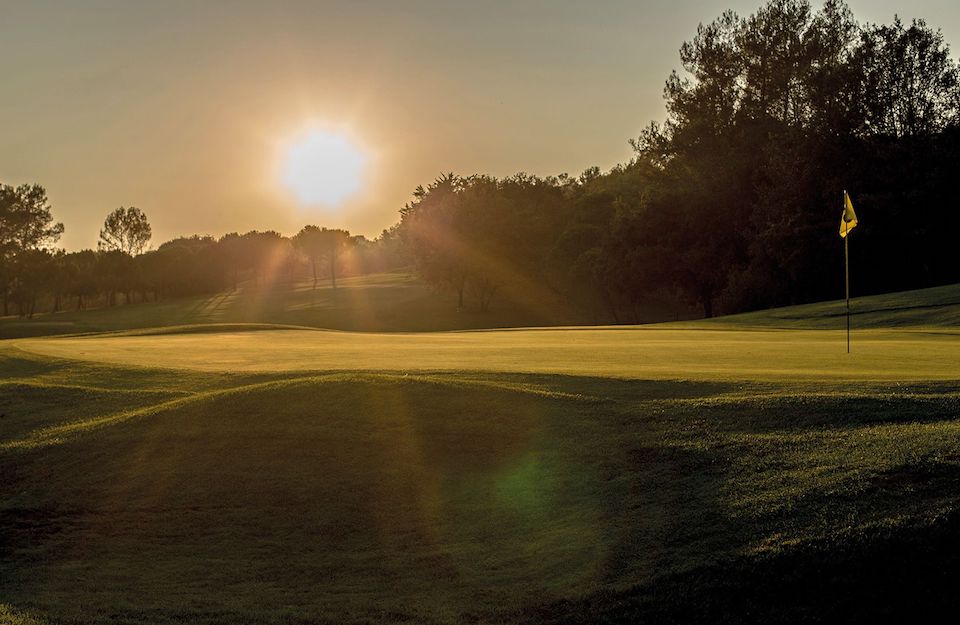 With blue skies, golden sunshine and breathtaking scenery, the French Riviera is a paradise for golf lovers. There are dozens of prestigious golf clubs up and down the coast from Monaco to St Tropez, designed by some of the world’s leading course architects.

Set amongst the rolling hills of the hinterland or overlooking the Mediterranean, each fairway is more beautiful than the last, and there’s always time for another round or two before lunch.

To help you decide where to tee off next, we’ve put together a guide to ten of the very best golf courses on the French Riviera. Browse our selection below to enjoy the spectacular surroundings of these golf clubs next time you’re in town:

Dating back to the 1920s, the Golf Country Club de Cannes-Mougins is one of the most well-known and glamorous courses on the French Riviera. Remodelled by design duo Peter Allis and Dave Thomas in 1978, the Cannes-Mougins club is set in the forest outside the village of Mougins with a wonderful stone clubhouse at its centre. Former host of the Cannes Open, this par-72 course is blessed with wide open fairways and several natural water hazards where the Bouillide River crosses the club’s grounds. Surrounded by the Valmasque National Park, the Cannes-Mougins offers visitors the chance to play a traditional round of golf set against a glorious backdrop of lush green forests and mountains.

Just down the road from the Cannes-Mougins Country Club, you’ll find the Royal Mougins Golf Resort. Opened in 1993, this is the Country Club’s younger, sexier sister. Former home of the Cannes Open, the Royal Mougins is a championship club and features a series of spectacular holes requiring a wide range of technical skills and strategic play. Surrounded by forests with fabulous views of the countryside around Mougins, the Royal Mougins is also home to a luxury hotel and spa, the ideal setting to relax in fabulous style following a long day on the fairway.

Created by a Russian Grand Duke in exile and designed by legendary architect Harry Shapland Colt, Old Course Golf Cannes-Mandelieu was the French Riviera’s very first golf course. Set between the sea and the Siagne River, parasol pine trees provide shade for players at each of the club’s 18 holes while a magnificent Norman-style Clubhouse is the centrepiece of the course. Crossed by both a river and a railway line, the Old Course is renowned for its unique ferry boat service which takes players from one side of the river to the other after the 2nd and 12th holes. Don’t miss the opportunity to play a round or two at this classic club while you’re in the South of France.

Tucked away in the hills around Mandelieu-la-Napoule close to Cannes, the Riviera Golf de Barbossi is a fantastic modern course. Designed by American architect Robert Trent Jones in the 1990’s, the club was taken over by the Barbossi Domaine in 2008 and given an exciting new look. The 18-hole course now boasts a dazzling modern clubhouse with a large terrace, plus a fabulous collection of 22 contemporary sculptures which are displayed throughout the grounds. Don’t forget to pop into the pro shop after your game to check out the wonderful selection of wine on offer from the nearby Barbossi vineyards.

Designed by the Black Knight himself, the Golf Club of St Tropez has some of the best views in the region. One of only two Gary Player clubs in France, the St Tropez overlooks the four villages of the peninsula and offers players breathtaking views of the Mediterranean. A highly technical 18-hole course, the St Tropez winds its way between forests and open terrain and includes several significant elevation changes which will challenge even the most experienced player. Enjoy a drink in the idyllic surroundings of the Provencal-style clubhouse after your round to really make the most of the club’s exceptional setting.

Although it might only be a 9-hole course, the Valberg Golf Club set in the heart of the Mercantour National Park is well worth a visit. Just a short drive or helicopter ride away from the coast, this lovely little course was designed by Olivier Dongradi, an architect who specialises in creating mountain clubs. Situated 1700 metres above sea level, each hole offers players 360° panoramic views of Mont Mounier, the Saint-Honorat mountain range and the outstanding beauty of the Mercantour region. Be warned though, while beautiful the terrain is steep and hilly so hiring a golf buggy for the day is most definitely the best way to enjoy the course.

Sitting in the hills between the villages of Opio and Valbonne, this delightful course is one of the French Riviera’s most popular clubs. Set in the grounds of a 17th Century chateau, the 18-hole course was designed in the 1960’s by well-known English architect Donald Harradine. Winding through the hillsides and woodland of the hinterland, the 18th fairway sits adjacent to a Roman aqueduct while an open courtyard leads to the magnificent Chateau-style clubhouse. A charming and extremely playable course, this is definitely not one to miss while you’re in the area.

Located high in the hills above Grasse, the Chateau de Taulane is one of the French Riviera’s best-hidden gems. Created and designed by Gary Player in 1992, this delightful club is a haven of peace and quiet set in the grounds of an 18th Century chateau and surrounded by lush greenery. The 18-hole course has a fascinating layout requiring both strategy and placement and appeals to golfers of all levels looking for a new challenge. We strongly recommend taking your camera for the stand-out views from the 9th and 18th holes which will undoubtedly be the highlights of your round.

Just ten minutes away from both Cannes and Grasse, the Golf de St Donat is a lovely course surrounded by beautiful Provençal scenery. Designed by Robert Trent Jones Junior in conjunction with the Benedetti Group, St Donat was inaugurated in 1993. The 18-hole championship course is laid out in two nine-hole circuits and lined by majestic trees. With its sloping terrain, natural obstacles and numerous water hazards, St Donat calls for skill and a steady hand, but the views from the 10th and 16th holes will more than make up for the challenging game.

Renowned for its panoramic views and impeccable freeways, the Monte Carlo Golf Club is one of the best-known clubs in the world. Set just outside of Monaco in neighbouring La Turbie, the 18-hole club was designed by Willie Park Jnr back in 1911. Set 900m above sea level, this superb course offers players spectacular views of the French Riviera coastline where the mountains meet the Mediterranean. A challenging course with several elevation changes, the crowning glory of the Monte Carlo is without a doubt the view from the 5th hole. Overlooking France, Italy and Monaco, teeing off here is a truly unforgettable moment for any golfer.