THE TIMES: "Pick up a bargain - Buy a château"

As prices fall, only elite Riviera villas are immune from the Gloom says Claire Carponen from The Times. 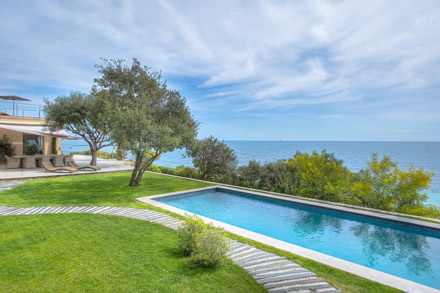 The red carpet on the Croisette has been rolled away. But even though the Cannes Film Festival is over for another year, the party continues in the area’s property market, which features as many stars as this year’s event. As we report below, the downward trend in French house prices continues, according to FNAIM, the French estate agents’body.

Low interest rates and the price correction should be encouraging families to move, but they are staying put. Only the upper tier of the market on the Cote d’Azur – where the price of other homes is down by as much as 5,6 per cent over 12 months – remains untouched by the gloom, despite the recent increase in the wealth tax.

When the French property market slumped in 2008, people thought that prices on the French Riviera would follow suit. Although the number of transactions dropped by about 60 per cent, however, prices only declined by an average of 5 to 10 per cent. “There have never been any bargains”, Jonathan Gray, the director of Beauchamp Estates, says. “At the time of the crash there were about ten properties where the owners needed to sell, but that was it.”

Last year’s general election also caused a lull, but since September demand for sale and rental properties at the upper end of

Some properties are now selling at 2007 prices. Buyers from Russian speaking countries continue to dominate the top end of the market – properties overs €10 million – according to Beauchamp Estates.

The increase in capital gain tax means that many people are refraining from selling. Non-French property owners have to pay more capital gains tax (now 34.5 per cent for EU residents). To be exempt, they now have to have owned a property for 30 years rather than 15. Plus, 0.55 per cent tax must be paid on assets over €800,000. “France is a less attractive offer to foreigners”, says Marc Philips in Cannes. “I’ve heard banks say to clients, ‘Do not invest in France’. People are paying more attention and structuring before acquisition to minimise the exposure.”

But the Cote d’Azur still has enduring appeal. The villas rented by the film festival’s big names cost €100,000 a week during the event and in high season. There has been increased interest in deluxe properties with hotel-style services – and investors are responding to demand. Properties are being refurbished to very high levels. In the hills above Cannes, in the La Californie district, a new Balinese-style villa is being built. Alang Alang has 1,605sq m of living space, panoramic views of the sea, Cannes and the mountains, and several terraces.

It also comes with a wine cellar, spa, super-high-tech security system and a dance studio. It is available to rent for €65,000 per week (services included) in July and August.

Even smaller villas are getting the same treatment. Villa Ithaque, one of only four waterfront villas in Cannes, has been completely refurbished and has a terrace shaped like the bow of a ship. The property, which neighbours a villa that Denis Hopper, Sean Penn and Jack Nicholson rented (not all at the same time) during the festival, has an island (well, a cluster of rocks) that leads to a jetty where you can moor your boat. It is on the market for €15 million (Beauchamp Estates).

In St Jean Cap Ferrat, along the coast, Villa O is a contemporary house built four years ago. Positioned on a hillside, the property has sea views, sleeps 12 and has a guesthouse and infinity pool. The house can be rented (€92,000 per week in July and August) for events and comes fully staffed. From the garden, Jonathan Gray points out , you can see across the bay to the village of Eze, where Bono owns a holiday home.

Name-dropping is hard to avoid in the South of France. Celebrities have been holidaying at the Hotel Du Cap Eden Roc in Antibes for decades, and Hollywood stars such as Elizabeth Taylor, David Niven and Sean Connery have owned pads here.

More recently it has attracted the likes of Angelina Jolie and Brad Pitt, who bought a chateau in Correns, in the Var region, in 2008.

The Cote d’Azur is still hugely popular with the British as a holiday destination, but buyers have completely disappeared from the market. “Between 2007 and 2009 there were a lots of British buyers,” Gray says. “After that, many decided to sell their properties to make the most of the exchange rate. The market was vibrant in London and people viewed property in the capital as a safe haven, as prices were going up and up.”

The weak pound and increase in taxes continues to make France a less attractive offer, but Gray thinks that British buyers will return over the next couple of years.

“We’ve seen an increase in interest from British buyers this year, but no sales yet.”