The start of a new year is, for many, an opportunity to reflect and seek inspiration for the year ahead. What better place for contemplation and reflection than London’s Royal Academy, and what better source of inspiration than the stunning works of Gustav Klimt and Egon Shiele?

The RA exhibition of Klimt’s and Shiele’s works is the result of a collaboration with the Albertina Museum in Vienna and marks the centenary of their deaths. The rare and fragile drawings on display from both artists offer intimate insights into their artistic relationships and differing processes. 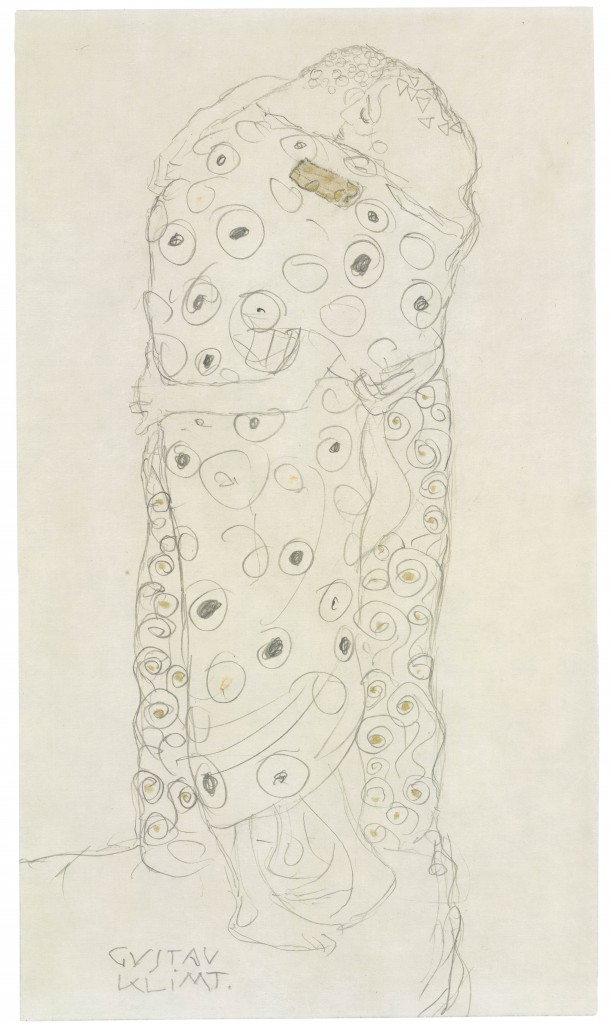 Gustav Klimt (14 July 1862 – 6 February 1918) was an Austrian symbolist painter and one of the most prominent members of the Vienna Secession movement. Noted for paintings, murals, sketches and other objets d’art, many of his most famous works take the female form as their primary subject.

In his early artistic career, he was a successful painter of architectural decorations, executed in a more conventional manner. As he developed his personal style, his works were the subject of much controversy: the ceilings he painted in the Great Hall at the University of Vienna were heavily criticised, and as a result he stopped taking public commissions. He went on to achieve even greater success with his ‘golden phase’ works, many of which include gold leaf, and are his most well-known works. One painting, a portrait of Adele Bloch-Bauer, The Lady in Gold, has achieved particular fame, having been the subject of a book by Anne-Marie O’Connor and a film, staring Helen Mirren and Ryan Reynolds, Woman in Gold.  The prominence of Klimt and that of his work was an important influence on his younger contemporary, Egon Schiele. 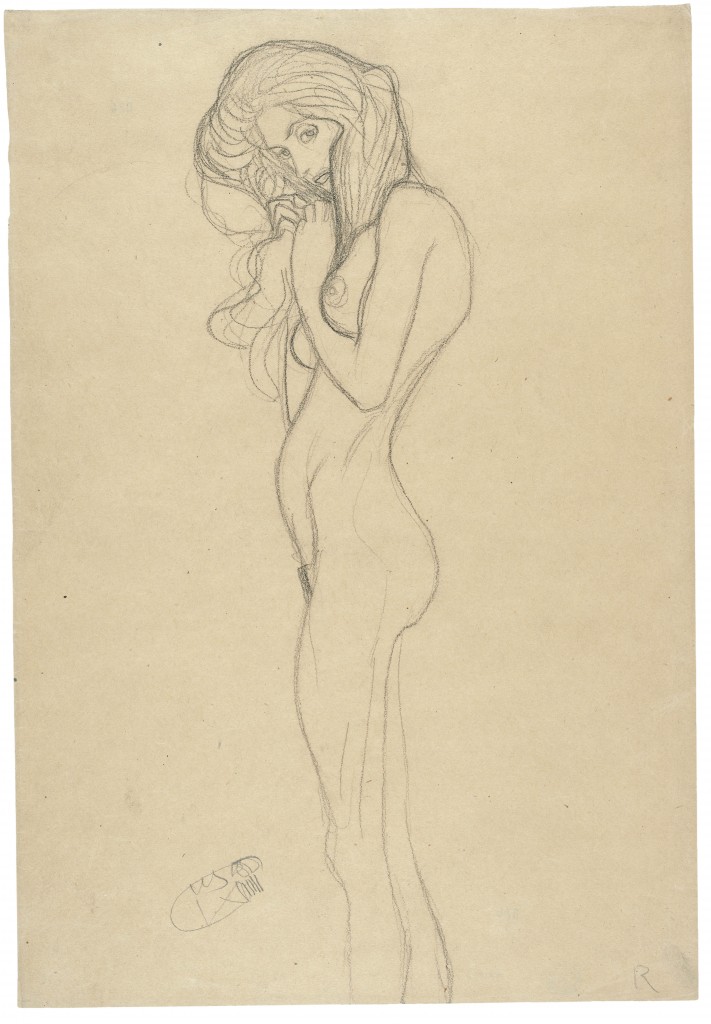 Egon Schiele (12 June 1890 – 31 October 1918) was also an Austrian painter and protégé of Gustav Klimt.  Schiele was a more figurative painter and his work is noted for its raw sexuality and intensity, and the many self portraits he produced.

The son of Adolf Schiele, who was employed by the Austrian State Railway as a station master at Tulln, Schiele was fascinated by trains and would spend many hours drawing them, to the point where his father felt compelled to destroy his sketch books. At 11 years of age he moved to Krems and later to Klosterneuberg to attend secondary school. He was a strange child; shy, reserved, performing poorly at school, with the exception of athletics and drawing. He also displayed incestuous tendencies towards his younger sister Gertrude, a cause for concern on more than one occasion.

When Shiele was 15, his father died from syphilis and he became a ward of his maternal uncle, Leopold Czihaczek, also a railway official.  His Uncle wanted him to follow in his footsteps, and while distressed at Shiele’s lack of interest in academia, he recognised his talent for drawing and allowed him a tutor, artist Ludwig Karl Strauch.

In 1906 Schiele applied at the Kunstgewerbeschule (School of Arts and Crafts) in Vienna, where Klimt had once studied. Within his first year there Schiele was sent, at the insistence of several faculty members to the more traditional Akademie der Bildenden Künste also in Vienna. His main teacher there was Christian Griepenkerl, a painter whose strict doctrine and ultra-conservative style frustrated and dissatisfied Schiele and his fellow students, so much so that he was to leave three years later. 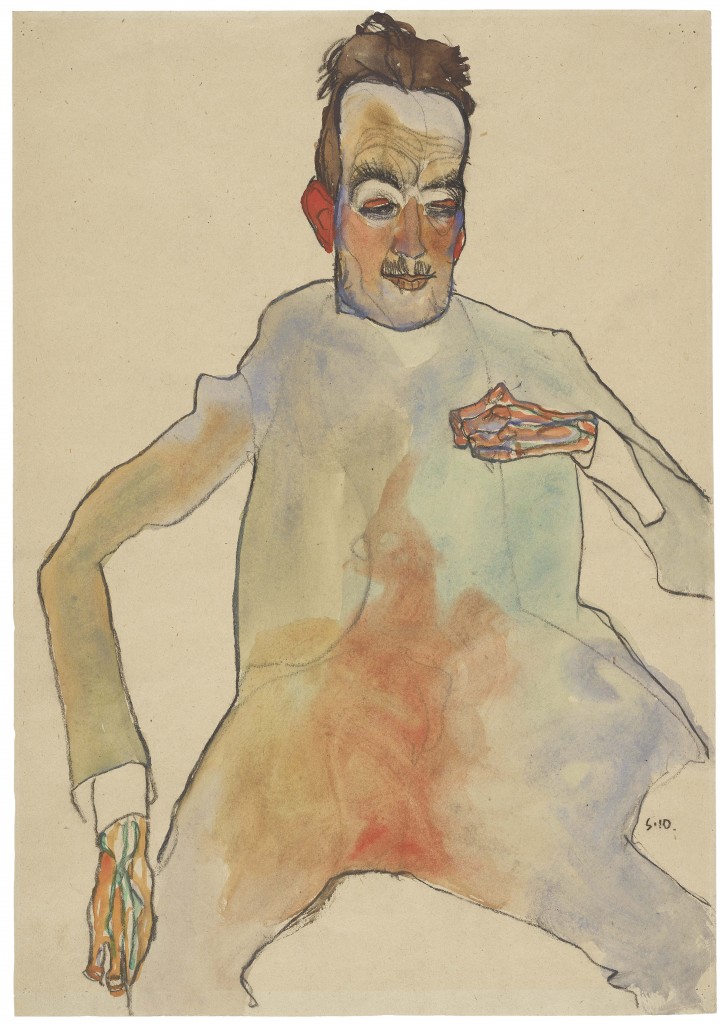 In 1907 Schiele sought out Gustav Klimt, who generously mentored younger artists. Klimt took an interest in the young Schiele, buying his drawings, offering to exchange them for some of his own, arranging models for him and introduced him to potential patrons. He also introduced Schiele to the Wiener Werkstätte, the arts and crafts workshop connected with the Secession. Schiele's earliest works between 1907 and 1909 contain strong similarities with those of Klimt, as well as influences from Art Nouveau.

Schiele left the Academy in 1909, after completing his third year, and founded the Neukunstgruppe ("New Art Group") with other dissatisfied students. In his early years, Schiele was strongly influenced by Klimt and Kokoschka. Although imitations of their styles, particularly with the former, are noticeably visible in Schiele's first works, he soon evolved his own distinctive style. 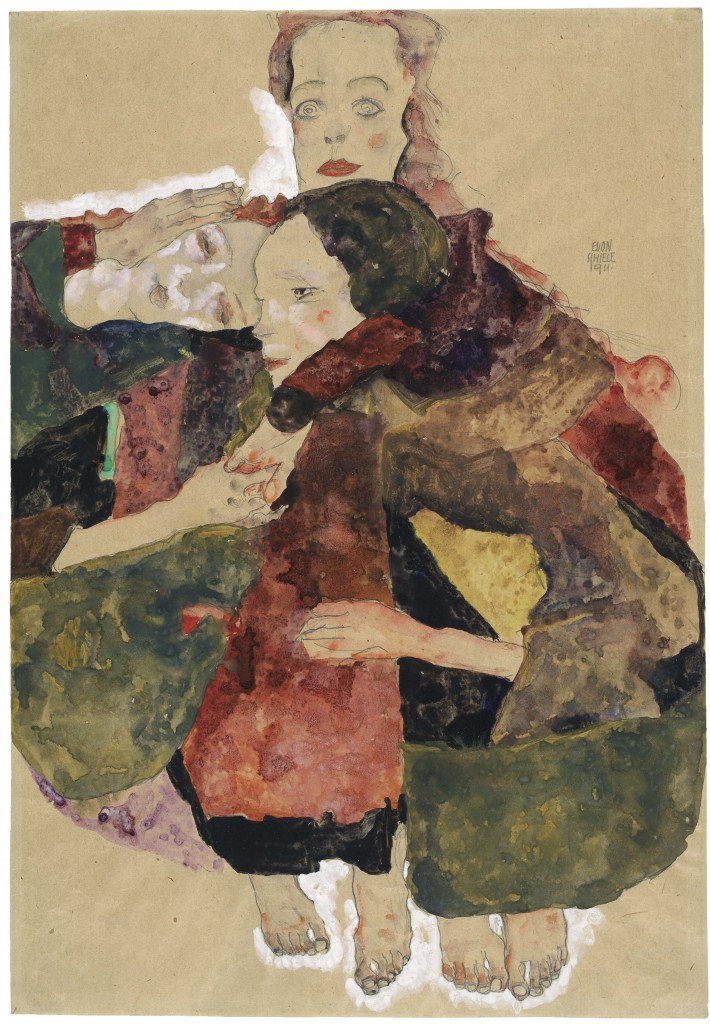 Klimt invited Schiele to exhibit some of his work at the 1909 Vienna Kunstschau, where Schiele encountered the work of Edvard Munch, Jan Toorop, and Vincent van Gogh, among others. Once free of the constraints of the Academy's conventions, Schiele began to explore not only the human form, but also human sexuality. Schiele's work was already daring, but it went a step further with the inclusion of Klimt's decorative eroticism and with what some may like to call figurative distortions, that included elongations, deformities, and sexual openness.

Klimt / Schiele: Drawings form the Albertina Museum, is a unique opportunity to see extraordinary drawings produced by both artists, considered to be some of the 20th century’s most important works on paper. Among them are Klimt’s sketches for his seminal Beethoven Frieze, and unflinching self-portraits by Schiele, which due to their delicacy will not see the light of day again for many years.