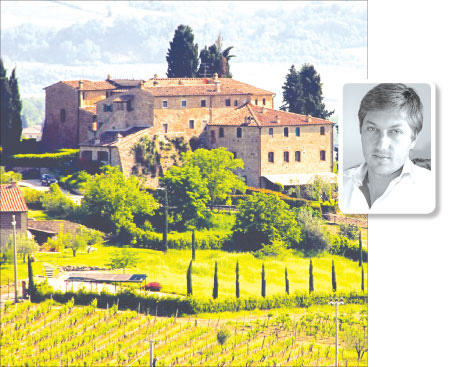 While European property experts, consulted by Asharq al-Awsat about conditions in their markets, admitted that prices have been down in recent months, some believe the current stage represents a golden opportunity to acquire distinguished properties at prices that have not been available before. One of the main examples is a four-bedroom villa at Mykonos Island in Greece overlooking the sea directly sold for one million Euros. That opportunity was described by Roi Deldimou, head of Beauchamp Estates office in the island as unusual, especially that these sea-front properties are rare and none are built anymore in these coastal locations.

As for Jonathan Gray, head of Beauchamp Estates’ office in Cannes, he sees indications of revival in the region this month. He notes that competition in the luxury segment is between buyers from Russia, the Middle East and the UK. They compete for well-known aristocratic locations in Cannes, Saint Tropez, Cap d’Antibes, Saint Jean Cap Ferrat and Monaco. Recently, he also noticed revival of the quaint city of Theoule Sur Mer.

Lynne Davie, manager of Beauchamp Estates in Florence, Italy, which specializes in Tuscany properties, says that the best time to buy properties in the Italian province is now. She confirms that her office receives a lot of enquiries and high level of interest from clients in the luxury segment of the market. This interest in Tuscany is due to its rich cultural heritage and varied geography between green pastures and coastal lands. The region is famous for its quality of life and Italian cuisine and is one of the most attractive areas in Italy for tourists.

Demand is rising in Tuscany for prime properties, in good locations, that have been renovated. Clients request prime locations of Tuscany such as, Chianti, Florence, Siena, and coastal areas. Tourist properties offer advanced services and technologies for a specific group of HINW clients. These properties appreciated considerable more than other properties in the past five years.

The main areas of growth from international clients are from some of the strong emerging economies - Asia, India, Singapore, Hong Kong China and Latin America. Whilst demand from the more traditional markets remains unchanged with buyers coming from the Middle East, UK , USA, Canada, and Russia. Lynne says that one of the deals closed recently was for a British client who bought a 680 square meter country house, with 10 hectares of land, in need of modernization, for two million euros. These clients often do restoration work themselves and resell the property at a higher price.

Jonathan admits that the French market has slowed down in 2012 because of French presidential elections and the prevailing economic conditions. This has led to temporary loss of motivation from some clients, buyers and sellers alike. However successful sales still have been completed and after analyzing the market, buyers realized the South of France still remained an investment as safe as it used to be: it is one of the few places in France that has not really been hit by the crisis. Monaco on the other hand has been exceptionally active due to its fiscal advantages and its secure environment and some very interesting deals have been completed in the past year.

The latest deal Beauchamp Estates office in Cannes completed in Monaco was selling a penthouse apartment with sea views and a large terrace with swimming pool, at a sale price over 25 million euros.

As for the situation in Greece, Roi Deldimou says that many buyers are looking for rare opportunities in a stressed market. She thinks that Mykonos, where her office is located, is in a better situation from the mainland because of its prime location and popularity as a holiday destination, however even in Mykonos, prices have reduced by 20-30% and in some rare occasions by more. She describes the market as a “paradise for buyers”. She recently completed a deal to sell an apartment with an asking price of 600.000 Euros but closed the deal at 380.000 Euros.

Beauchamp Estates also issued its “Market Insight” last month which revealed that there are 71,000 foreign-owned properties in the French Reviera between Saint Tropez and Cap Martin (excluding Monaco). This area includes some hot spots such as Cannes, Cap d’Antibes and Saint Jean Cap Ferrat. International demand and good reputation of the region contributed to rise in demand by 15% between 2003 and 2009. The market is now dominated by buyers from Russia, Britain, France, the Middle East and Scandinavia.

Demand from all over the world keeps the Riviera prices stable and rising. Prices in the area are 82% above the French average (excluding Paris). They are growing at faster rates than the rest of France. Between first quarter of 2000 and first quarter 2007, prices in the South of France have increased by 144%, compared to 111% in France generally. Prices of apartments appreciated by 155% compared to 129% for houses.

On offer at the moment is a sea-front villa on the Western side of Cap d’Antibes at a price of 9.8 million Euros. A five-bedroom apartment in Cannes was sold recently for 7.7 million Euros.

Tourism is still expanding in Greece despite its economic difficulties and the tourist property sector is growing with it. The number of foreign tourists in Greece in 2011 reached 16.4 million, an increase of 9.5% compared to their numbers in 2010. Mykonos contributes to the tourist sector, which grew in the island by 12% in the last year. Ten flights reach the island daily from various European countries. Tourist statistics in the island indicate that visitors from Lebanon have doubled in number with a strong increase from Russia. Some 83% of the island tourists arrive during the summer season. The region of Tourlos in the island is famous for attracting attention in the tourist properties to let. The area has some fantastic views overlooking the Marina and downtown. In the current economic climate, interest in the market is directed at the top of the market from wealthy buyers. The Beauchamp report points out that investors from the Gulf region dominate the two-million-euro segment and above.

Tuscany is regarded as the third largest tourist region in Italy and is visited annually by six million tourists. Therefore, its coastal properties are among the highest in price in Italy, except for Rome, Portofino and Capri. Florence, the provincial capital, is also distinguished for its properties which are easy to reach from outside Italy. The economic crisis and lack of confidence have led to decline in rate of closed deals in the area by a third between 2006 and 2011 with additional decline in 2012.